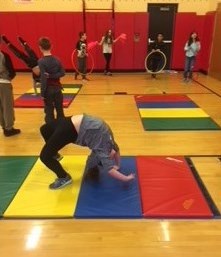 Last spring, Patchogue-Medford fourth graders were learning about nutrition. Their teachers wanted the students to understand the impact proper nutrition on physical activity. Together with teaching artist Danielle Marie Fusco, the educators developed an arts-integrated project that employed a mock circus training program and circus performance to explore nutrition, human anatomy, and the science of movement.

During the first of five sessions, Ms. Fusco introduced the project to the fourth graders. The students were scheduled to see “The Art of Circus” by CIRQUE-TACULAR. Ms. Fusco told the students that they would be participating in a circus training program and prepare their own circus performance.

She distributed fitness journals to the teachers and students. As part of the training program, teachers and students would record daily eating and physical activities in the journal. In addition, everyone recorded their five physical goals for the project. As the project progressed, they would consider the impact of their physical activities on their physical goals. Each session of the residency would close with a discussion of their recent journal entries. 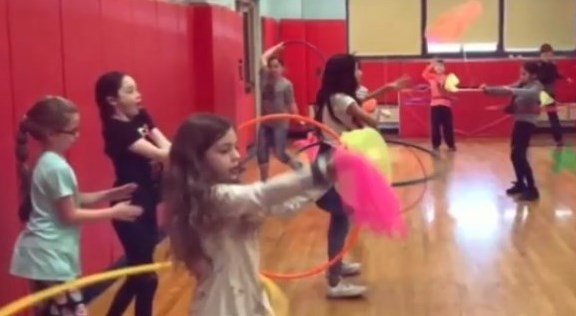 Next, Ms. Fusco engaged the students in a discussion about the key components of circus health. Afterwards, she introduced a mock circus training boot camp, which consisted of a series of movement stations. The children were challenged to practice jumping jacks, using hulas, planks and push-ups, cartwheels and rolls, juggling scarves, and stretching.

In Sessions Two through Four, students learned about human anatomy and the science of movement, exploring the different elements of dance, aesthetic structural alignment, and specific anatomical landmark (ie, joints and muscles). 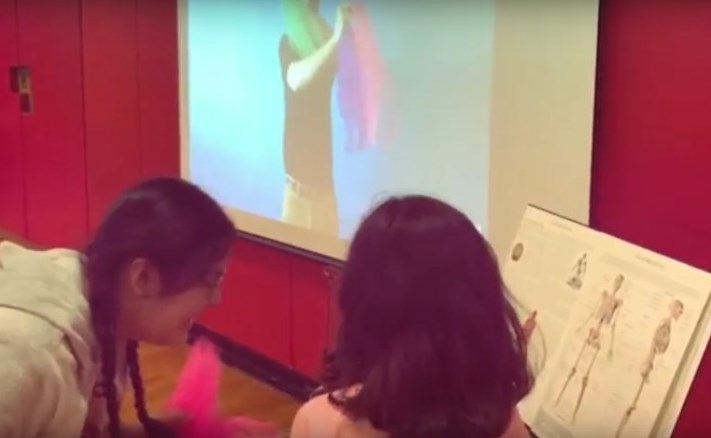 Each lesson was reinforced with a video clip. For example, during the lesson on joints, the teaching artist shared the following video of a Cirque du Soleil contortionist:

Next, the students were asked to create a movement phrase that demonstrated the anatomical landmark studied during the session. The movement phrases would be used to build a circus act.

At the start of Session Five, Ms. Fusco asked for feedback from the "Art of Circus" performance. The students were enthusiastic about the show, particularly the artwork, movement, and specific acts (ie, juggling). The discussion set the tone for the session. 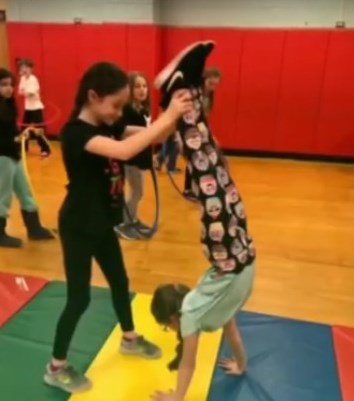 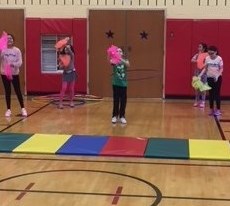 The student groups began to prepare their circus acts. Ms. Fusco provided scarves and hula hoops, and told them to rehearse what they had been working on. She divided the gym into mat work and hoop work. While some students worked on hula hooping, others practiced tossing scarves into the air. There were also groups working on acrobatic movements, such as walking on their hands, round-offs, and cartwheels. When they were ready, the students performed for their peers. 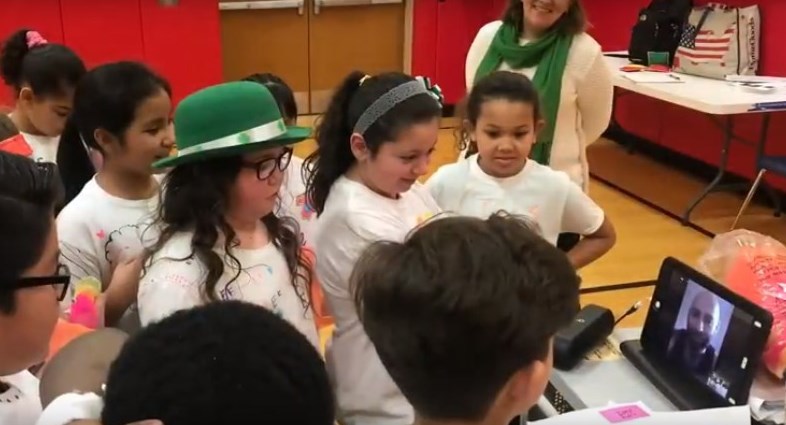 Excitement for the student performances heightened when Ms. Fusco announced that Ara Kocharyan, an acrobat with CIRQUE-TACULAR, was going to connect virtually with the classes and critique the students’ work. After each student group performed, they gathered in front of Ms. Fusco’s laptop and eagerly listened to Mr. Kocharyan's specific feedback (photo, above). The students then applied the acrobat's suggestions. The improvement was evident. "The connection with the CIRQUE-TACULAR performer gave the project a whole other level,” noted one teacher. “It was really great.”

For a culminating discussion, Ms. Fusco  referred to the classes'  fitness journals. Through a series of questions and answers, the students made the connections between a healthy diet and the ability to execute and create movement.  Here's Ms. Fusco's summary video of the project: