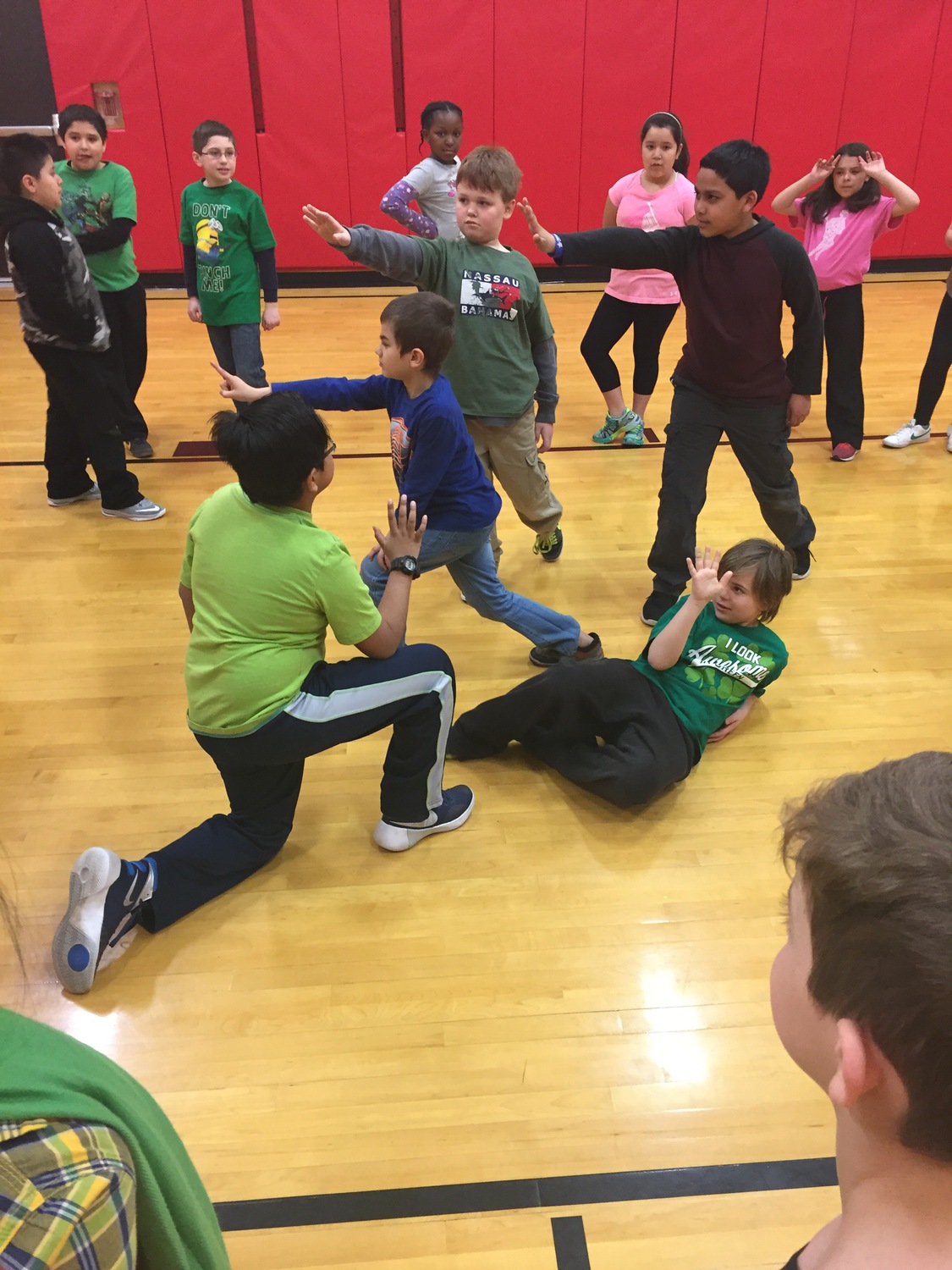 Bullying often involves several different characters. There’s the bully and the bully’s target, and frequently, one or more bystanders and an “upstander” (the person who acts to stop the bullying). In “Sticks and Stones,” a theatrical production with an anti-bullying message, one actor, Lyle Cogen, portrays six different characters. Patchogue-Medford fourth grade students and South Huntington fifth grade students were recently scheduled to see "Sticks and Stones" performed. To prepare the students for the show, Grades 4 and 5 teachers collaborated with teaching artist Dafna Soltes Stein. Ms. Soltes Stein helped the students explore how one actor can embody many different characters.

For her residency, Ms. Soltes Stein engaged the students in theater games and literacy activities that supported social-emotional skill building. The activities reinforced the target words (ie, bully, target, bystander, upstander) used in “Sticks and Stones” as well as demonstrated the impact of verbal and non-verbal communications. Ms. Soltes Stein stressed how one actor can be transformed into several characters through verbal and non-verbal communication (ie, tone of voice, facial expression, body postures and gestures), along with appropriate costumes. “Non-verbal communication can be used to support or contradict the words being spoken by a person,” she told the students. 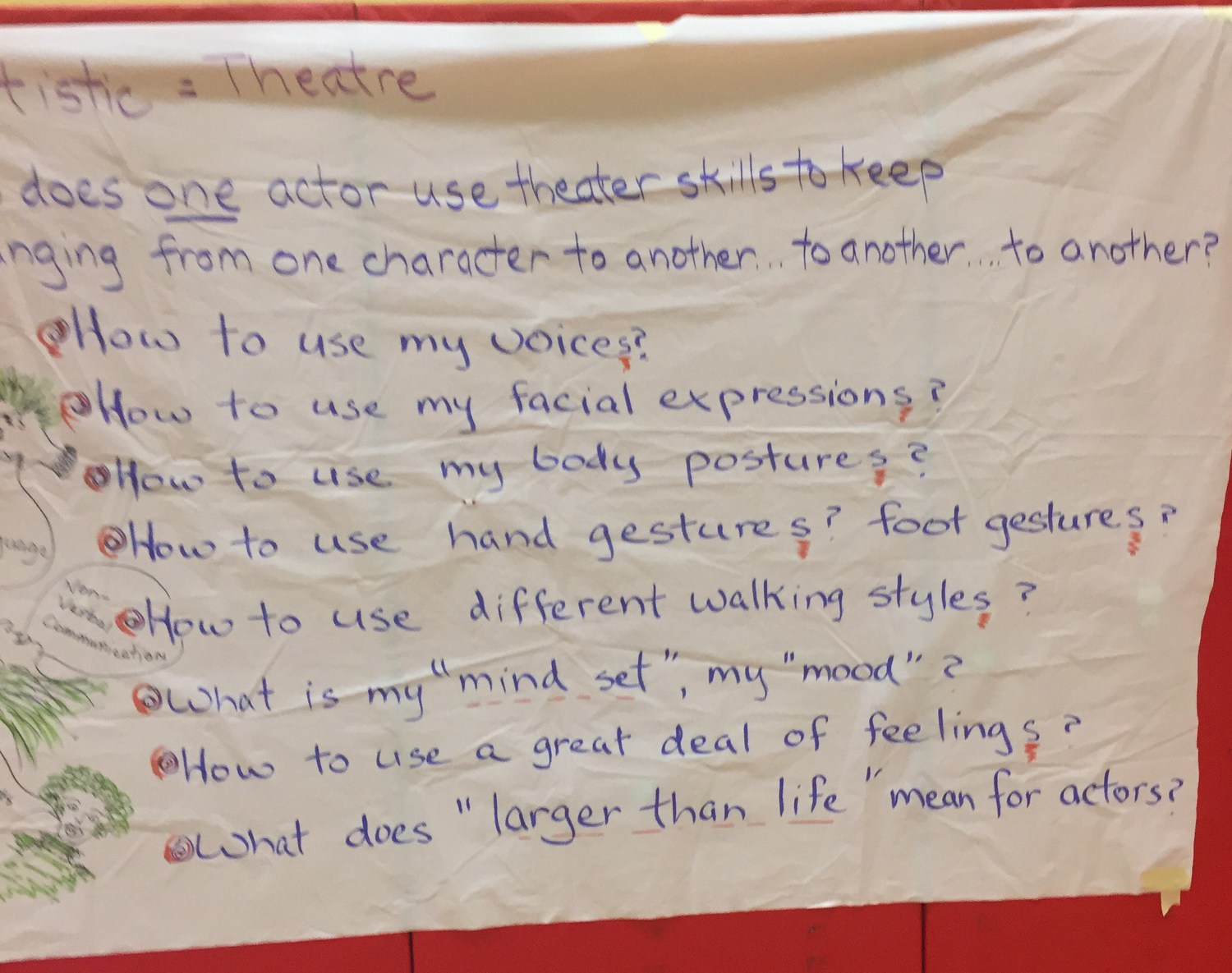 For example, during an echoing activity, the teaching artist made a statement (ie, “Listen to me”) and then augmented the statement with gestures and voice inflection. The students echoed each version of the statement. After a few examples, students became the “starter” of the statement, using a range of emotional states of mind (ie, calm, angry, nervous, threatening, scared, silly, curious, assertive). 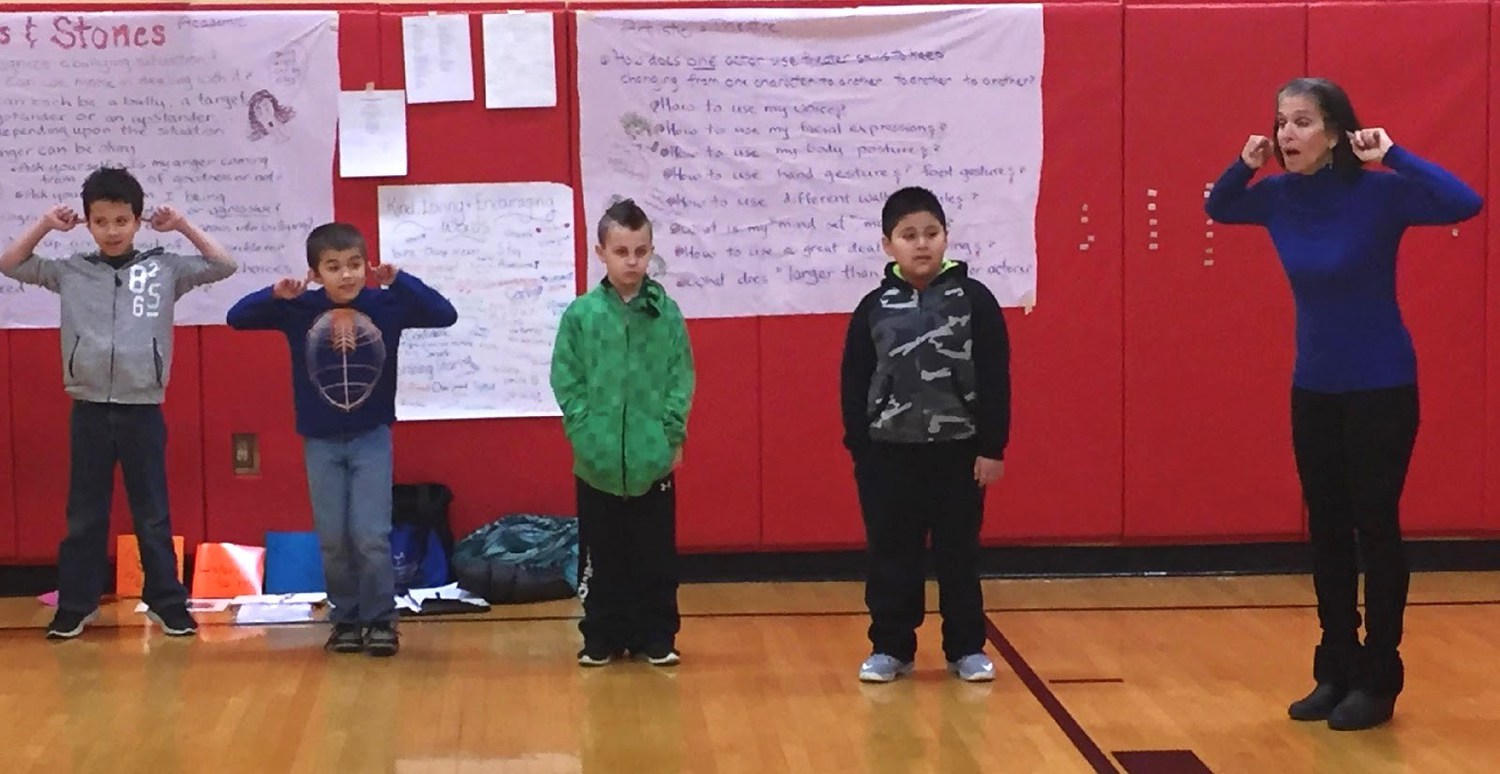 For a mirroring activity (below), students mirrored their partner’s movements. “This activity is an effective way to get students to slow down, pay close attention,” noted the teaching artist. 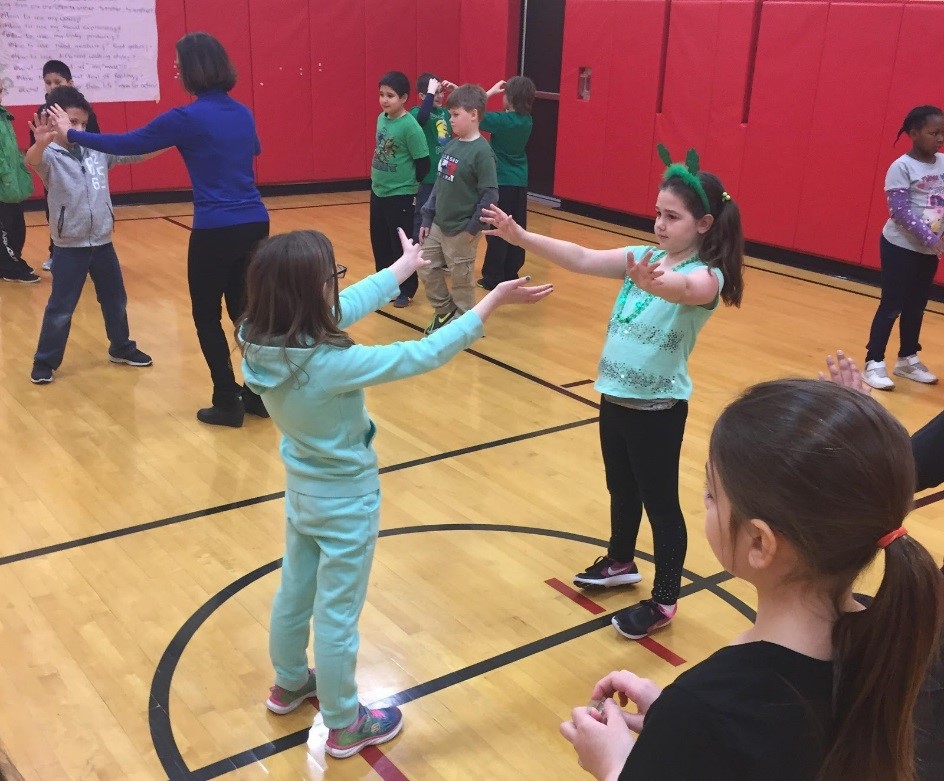 During subsequent sessions, Ms. Soltes Stein introduced body sculpting. Students created body sculptures to express different feelings, such as “don’t come near me.” They also volunteered to create multi-person sculptures. Once completed, the rest of the class moved around the multi-person statue. The teaching artist coached the students, directing them to look at each face, to examine their eyes and expressions. According to one of the classroom teachers, “It was interesting to see my shiest children participate more than I would have expected. Personalities came out that I didn’t know were there.” 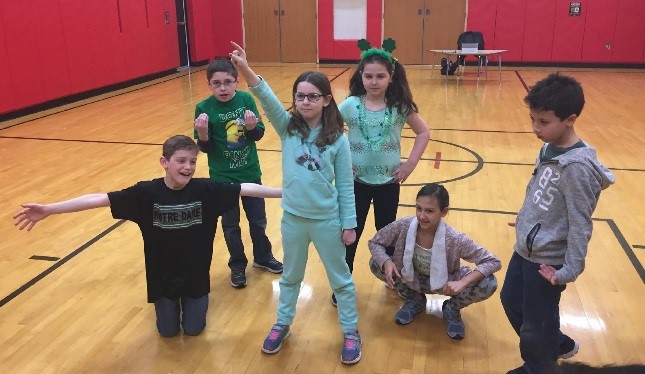 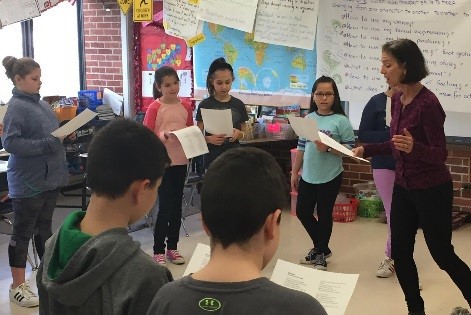 The students also spent time “reading” what was happening in photographs that portrayed different emotions and situations. 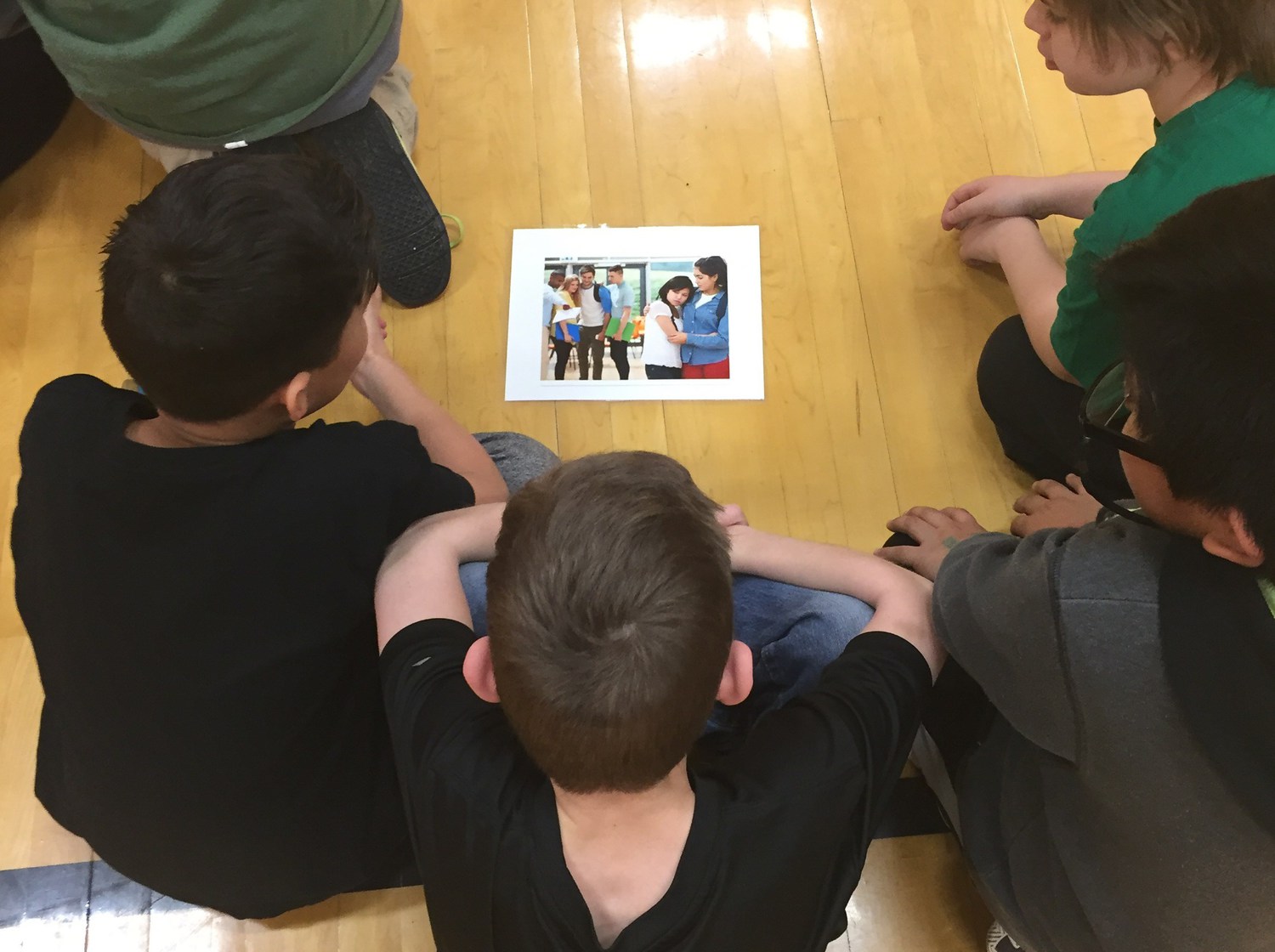 While the projects for Grades 4 and 5 students had many similarities, Ms. Soltes Stein made a few age-related adjustments. “The fourth graders were more focused on the theatrical movement—body movement and body language,” she explained. “They loved echoing their classmates and me. They also enjoyed the body sculpture—looking for the subtle differences. In fact, fourth grade teachers asked for more body sculptures." To prepare for the "Sticks and Stones” performance, the fourth graders put on costumes similar to those that the actor would be wearing for the different characters. Students learned that when you put on a person’s costume, you become that person. After the “Sticks and Stones” performance, Ms. Cogen, the actor, led a workshop on cyber safety, using discussion and theater games.

By contrast, the Grade 5 project was more focused on writing—developing dialog and turning that dialog into scenes. The students discussed the “Mean Words” poem as well another poem entitled “Bystanders.” Ms. Soltes Stein also introduced theatrical tableaux, which consists of a series of movements (beginning, middle and end). Students created a tableau based on a photograph. “We studied photographs of kind and cruel situations and wrote dialog to express the emotions.” Students brainstormed describing words. 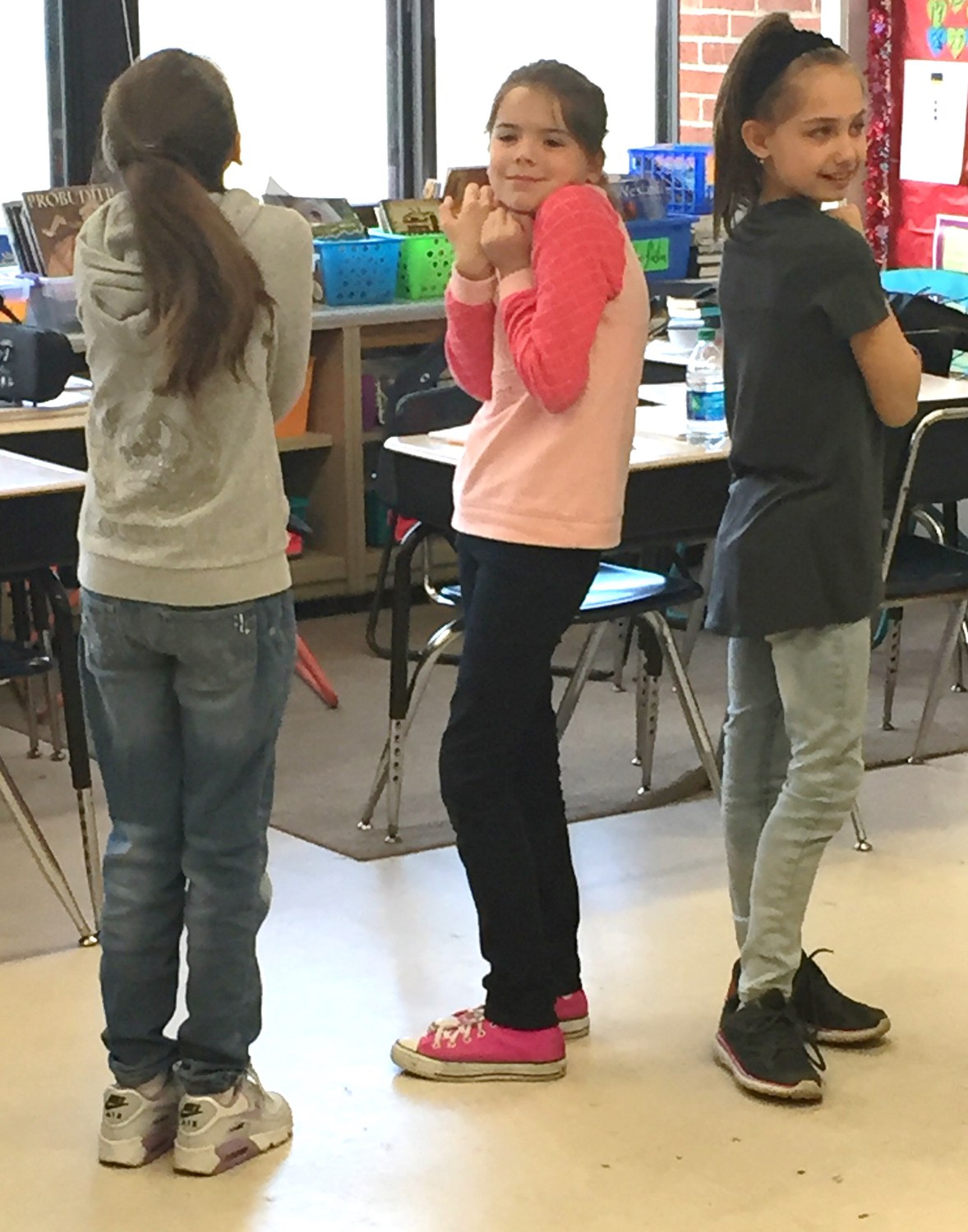 Later, students shared their tableaux. A spokesperson for each group described what was happening. After the “Sticks and Stone” performance, Ms. Cogen led an hour-long Q&A with the fifth graders. “The experience was very unifying, drawing in the special needs students,” Ms. Soltes Stein emphasized. 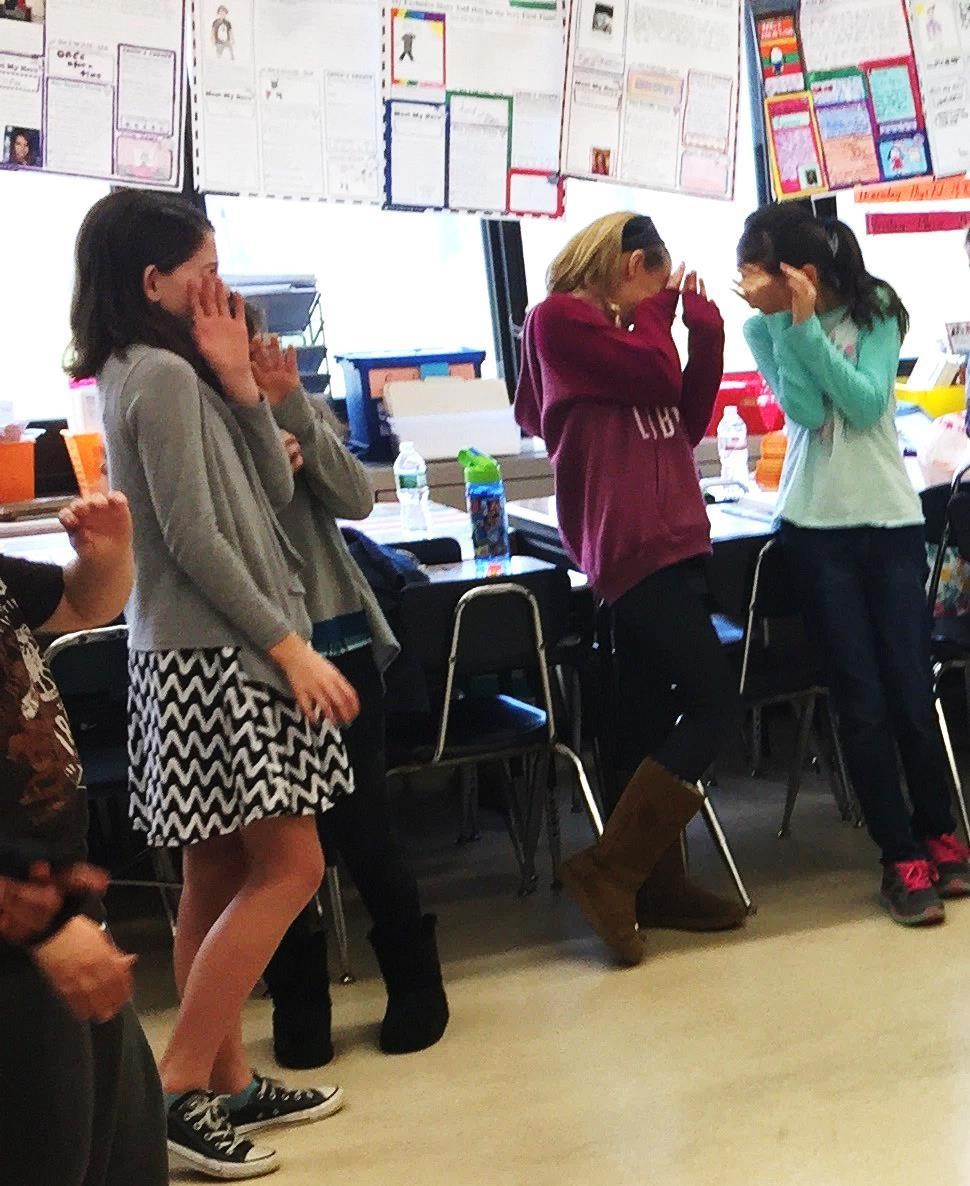 The faculty said they appreciated the project’s reinforcement of anti-bullying behavior as well as its support for good character traits, such as shared decision making, following directions, taking turns, working as a team. The teaching artist shared her appreciation for the teachers, who were “so thoroughly engaged.”

“I love teaching this curriculum topic because it allows students to practice crucial skills for life, such as recognizing non-verbal communication cues,” stressed Ms. Soltes Stein. “Learning how to bring this unconscious process into their consciousness is a powerful experience for students. They understand intuitively that such awareness is important for successful navigation of the social situations. Theater and dance bring this to the fore in a fun way. It’s play with a purpose.”