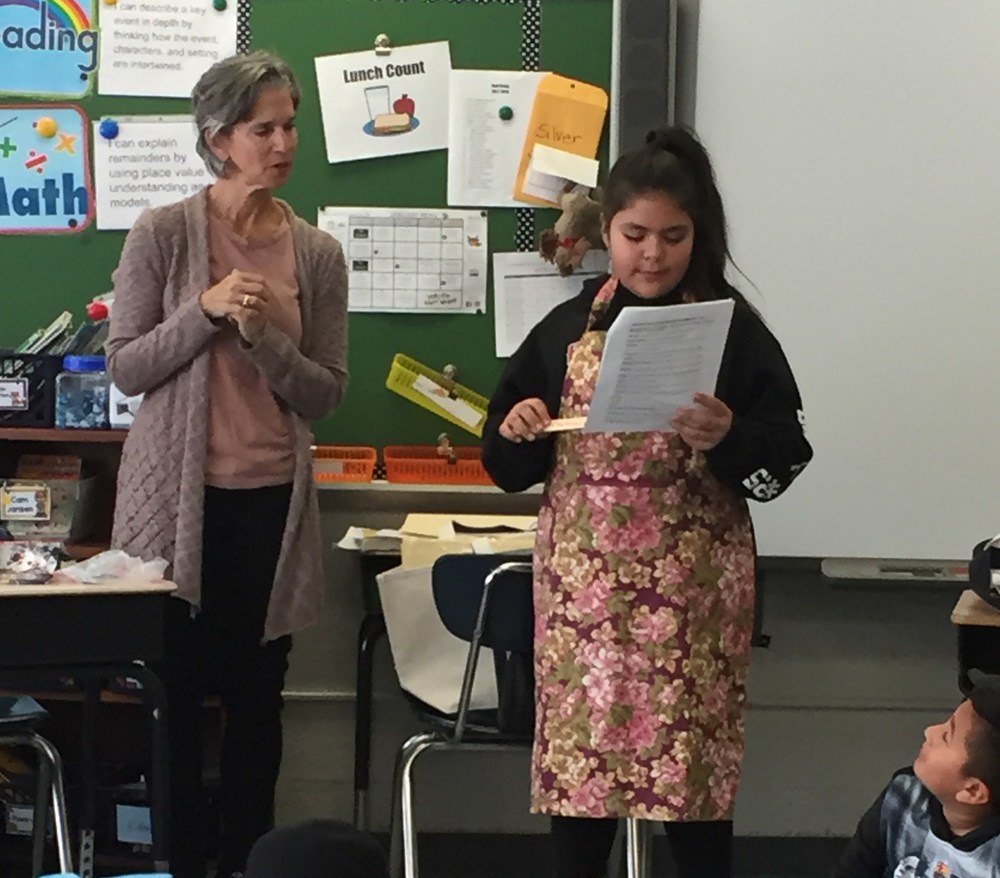 How does life for children in colonial America compare with life for children today? To help students explore the differences, South Huntington teachers collaborated with teaching artist Dafna Soltes Stein (above, left) on a project called “Long Island Then and Now.” Ms. Soltes Stein used games, props, songs, skits, and more to help fourth graders experience life long ago and compare it with their current lives.

The project’s first session focused on colonial home life, particularly the chores and games that would have occupied children. To begin the session, Ms. Soltes Stein greeted the students as colonial children might have been greeted by their adult. “Good morning to thee,” she said. “How art thou?” The class follows along, mimicking the teaching artist. 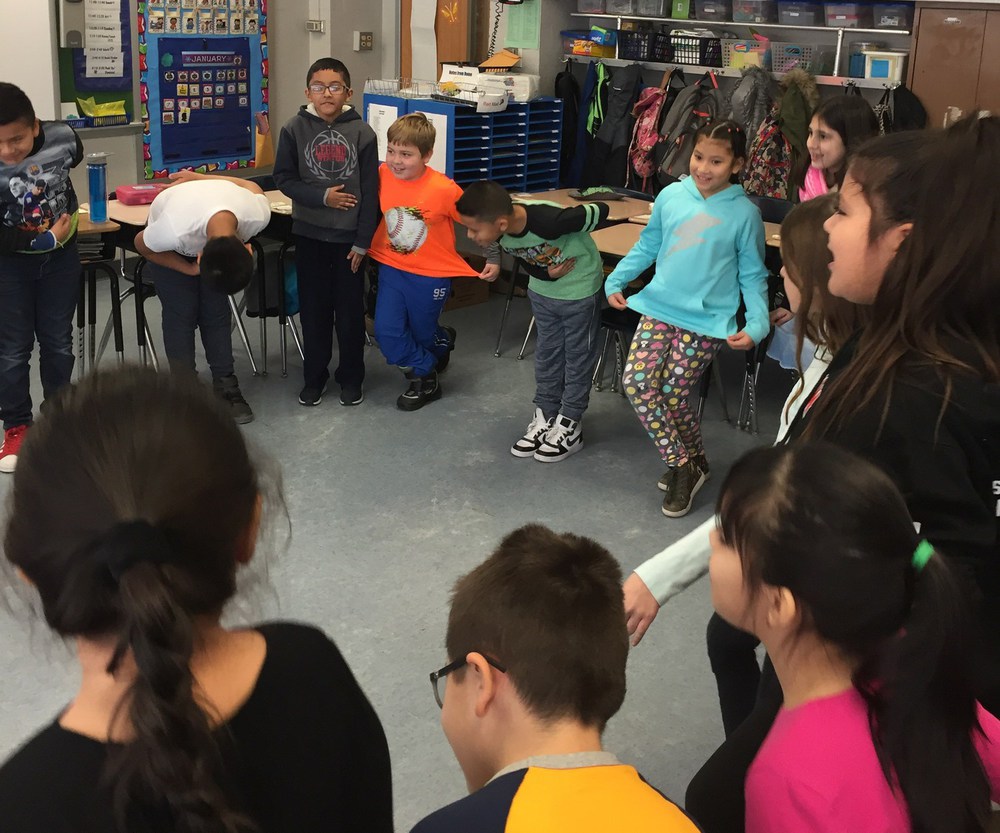 Next, Ms. Soltes Stein shared games typically played by colonial children. The games were made with natural materials: string, rope, rocks, pebbles, wood, cloth, leather and sticks. “If colonial people wanted anything—games, a home, clothing—they had to make it themselves,” she stressed. The students were asked to look for objects that could be used for a game and to bring them to school for the next session.

When the teaching artist met with the students again, they had been to the Long Island Museum (below). They had toured exhibits on American art, history and carriages. The exhibits focused on Long Island heritage. The students shared their museum experience with Ms. Soltes Stein. The teaching artist used the student responses as a springboard to share terms and expressions that related to different chores, such as winnowing wheat and using a scythe. 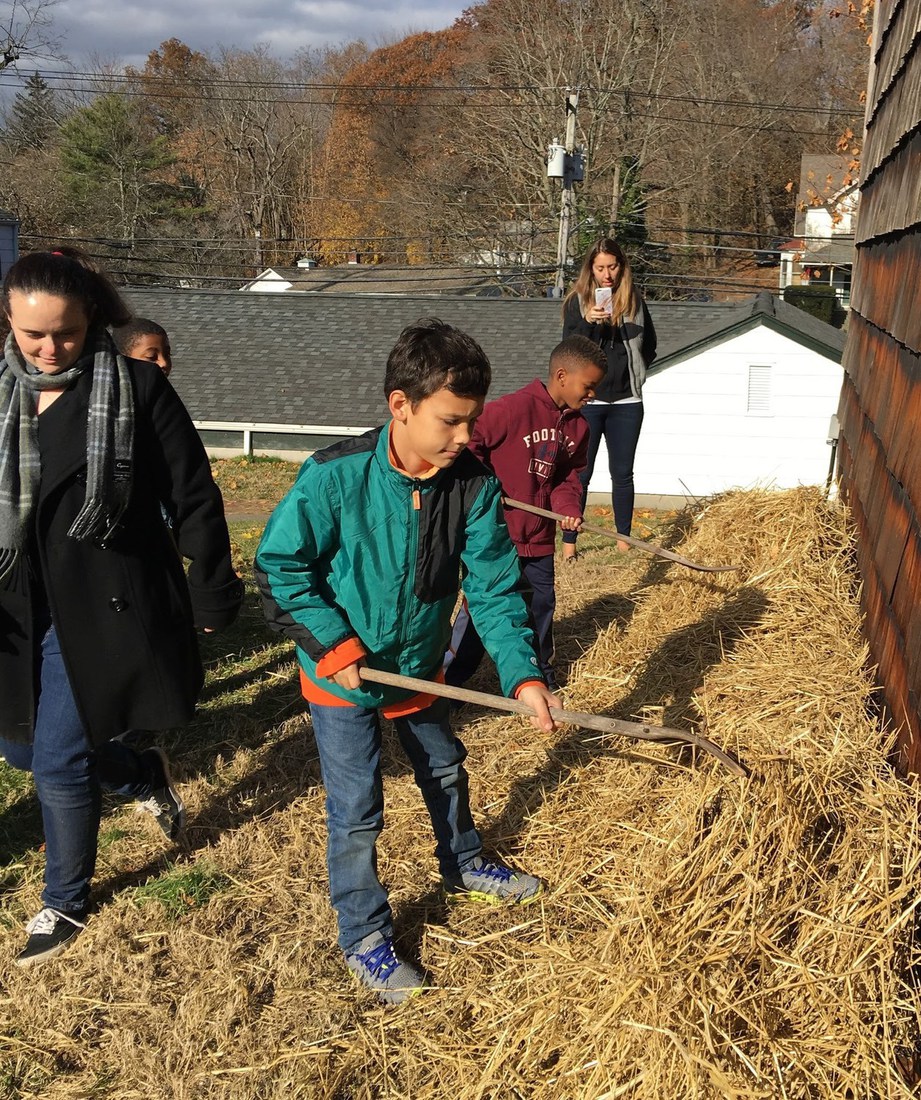 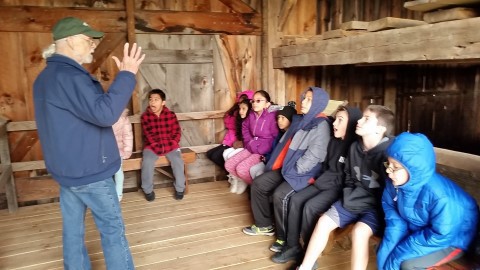 The students created games from materials brought from home. Afterwards, they took turns presenting the games. For example, one game involved balancing a stick on the bridge of one’s nose and keeping it from falling (below). Another game was one of strength, using dueling candy canes. 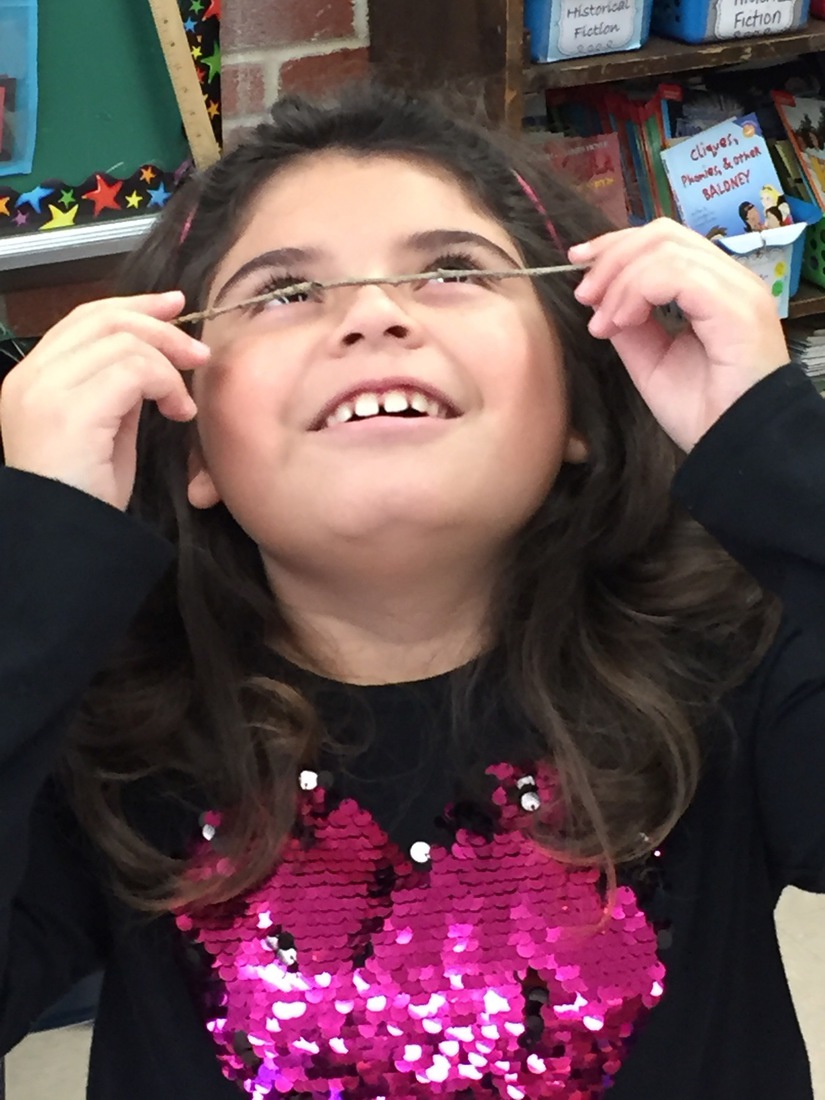 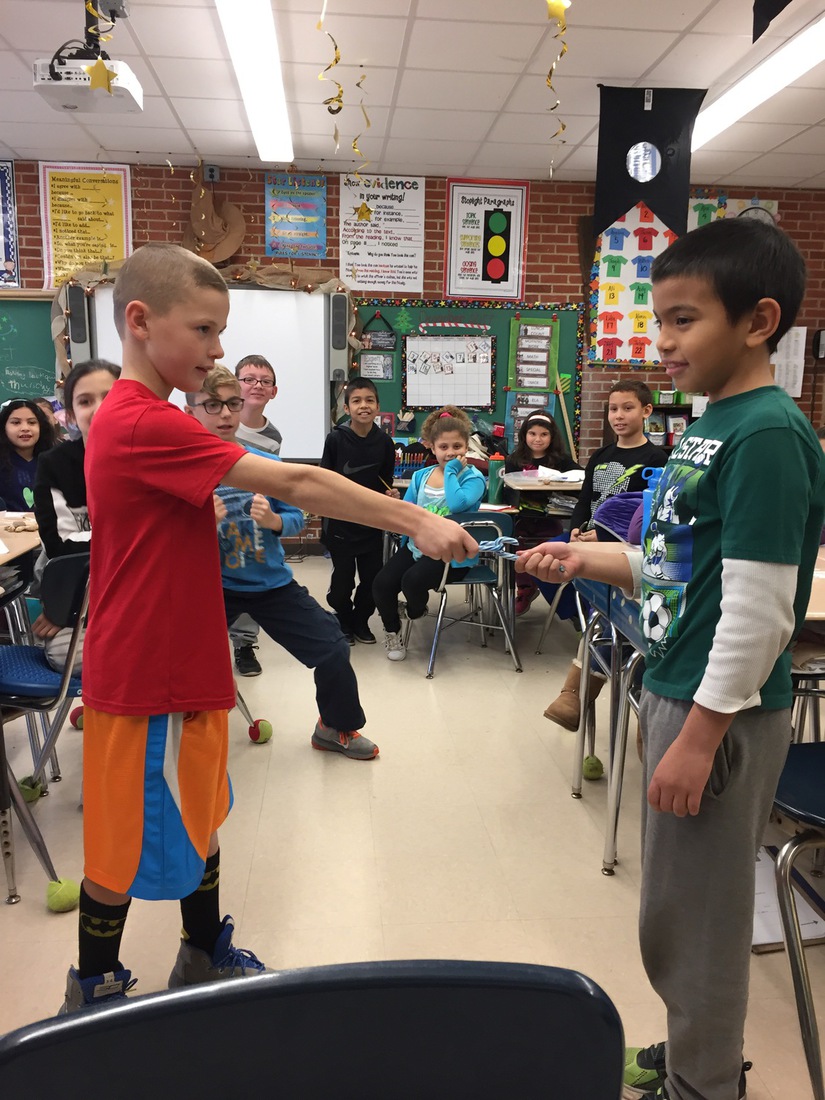 In Session 3 and 4, Ms. Soltes Stein focused on the colonial one-room school. She described what it was like to learn in that environment. She covered the daily activities and chores as well as methods of discipline. Colonial children were expected to sit up straight and use appropriate language. Ms. Soltes Stein used a rule to mimic discipline with a rod. The students considers the differences between discipline then and now. 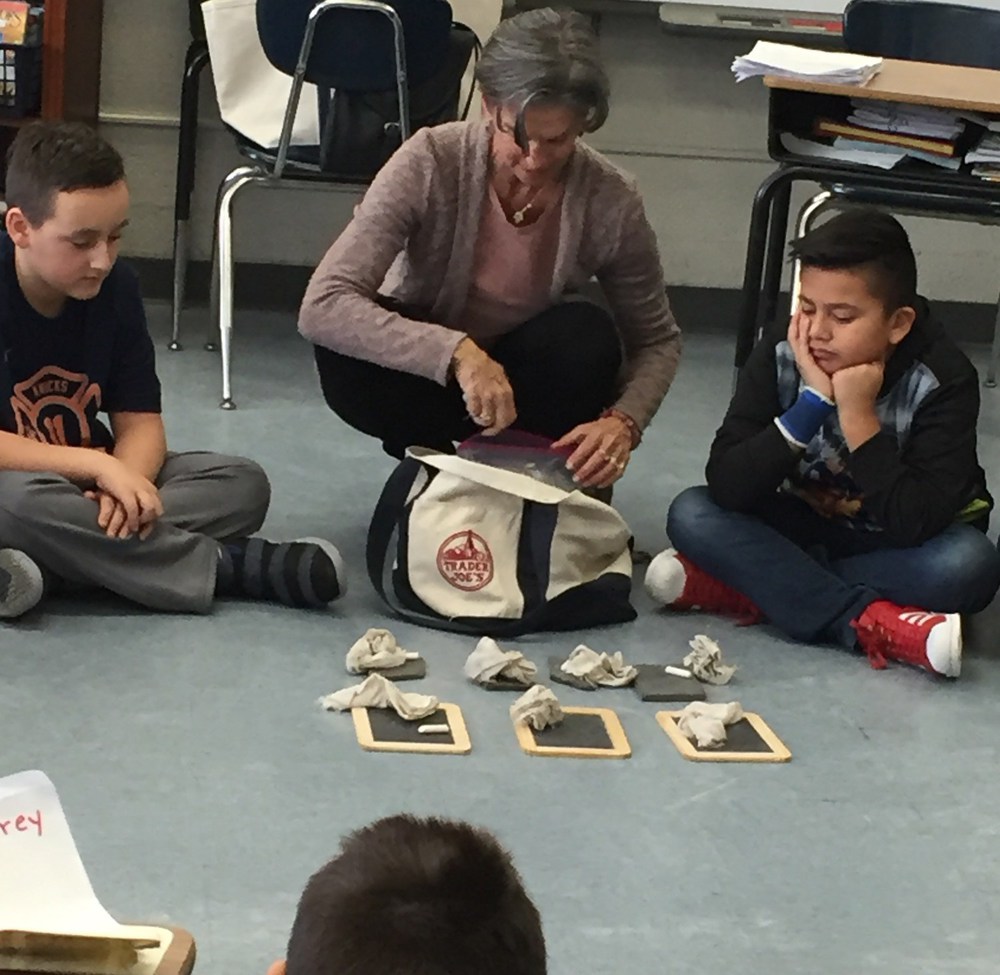 Next, the students learned about writing with chalk on slate (above). The teaching artist explained that ink and paper were too expensive in colonial times. The students were given pieces of slate to practice ‘ciphering’ (working with numbers). They also learned about Horn Books, a paddle-shaped board with a lesson, such as the alphabet or the Lord’s Prayer, adhered to it and laminated with material from animal horns. The students made their own Horn Books with the alphabet in cursive lettering (below). They enjoyed practicing the cursive writing. 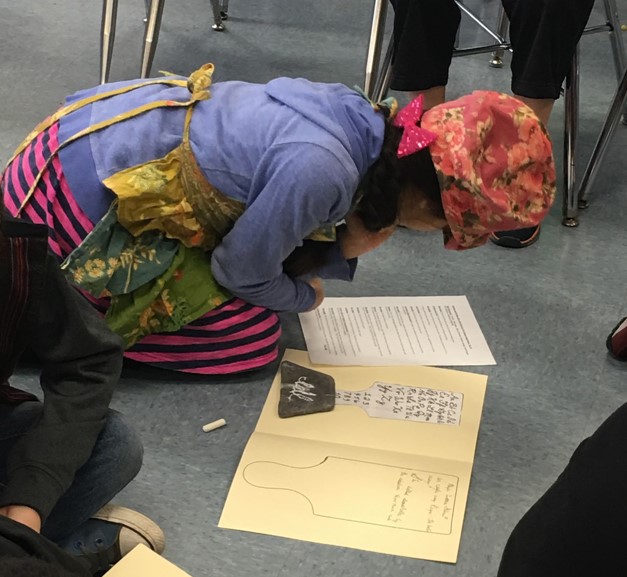 For a culminating activity, Ms. Soltes Stein passed out two scripts for skits, one on cyphering and the other on Horn Books. The scripts included references to many of the things (ie, language and behavior) that the students had learned. The teaching artist also provided costumes and props. The role playing allowed students to assimilate the differences between the past and present. Once rehearsed, the students performed for each other. 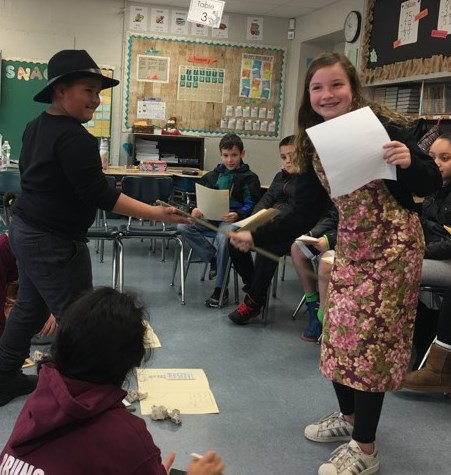 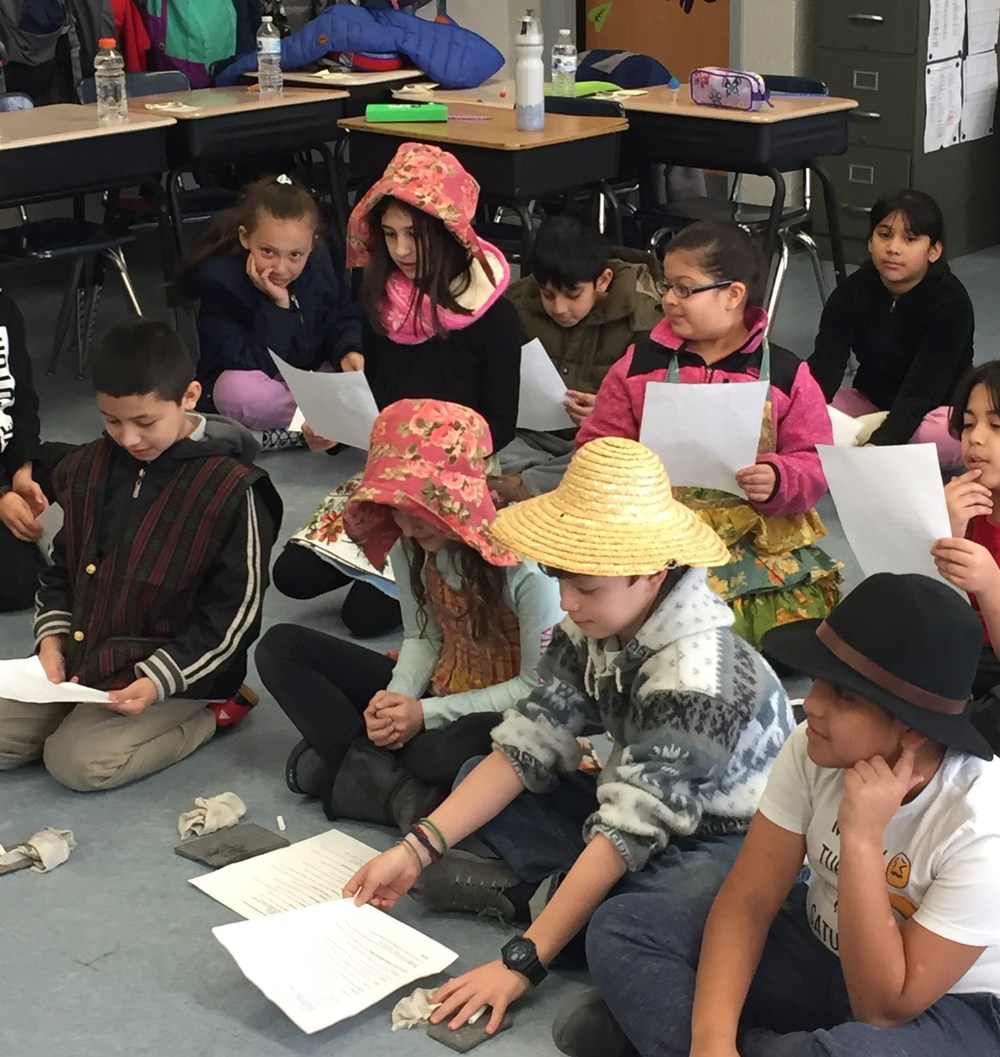